With the release of the brand-new Arrma Kraton 8S, we were lucky enough to get our hands one for a test drive and review... and what an epic car! The Kraton 8S is a massive 1/5th scale beast that is packed full of features and can reach speeds up to 90km/h. We’re going to break this review down into the three main categories of any RC car – electronics, maintenance and durability. Let’s get into it!

Because the Kraton 8S is a large 1/5th scale RC car, from the electronic point of view there are certainly some new products, running a full Spektrum system including the DX2E Active transmitter and SR6100AT AVC receiver that allows you to add telemetry functions. With the Spektrum radio system and some additional sensors we have a huge range of telemetry available to us, making it possible to keep track of things like ESC temperature, motor RPM, receiver voltage and drive pack voltage for our 8s battery setup. An optional dashboard bundle for the radio system is also available, where you can download the app to your phone and all the information is displayed on the Spektrum app which is extremely handy to keep track of everything. 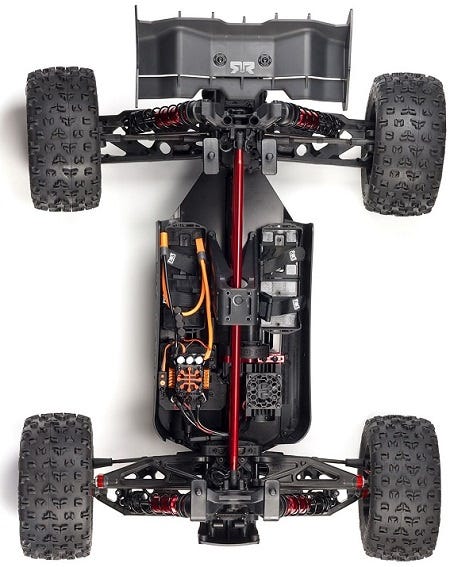 As the name of the car suggests, the Kraton 8S takes 8 cell LiPo batteries in the form of two 4 cell packs. There are two battery trays located on either side which will hold 4S 5000mah LiPO batteries nicely, but the battery trays also accommodate for larger capacity batteries if needed. Spektrum IC5 connectors are used in the Kraton 8S, which are backwards compatible with the EC5 connectors. If you’re using the Spektrum SMART batteries with the IC5 connectors there is some fantastic technology to take advantage of with the Spektrum SMART system.

The Spektrum S905 is a 1/5th scale metal-geared servo that has the servo saver assembly built into the front, saving the gears and protecting it from big impacts and movements. It is a 40-kilo servo, so plenty of torque to get the job done on this massive RC car and keep the wheels pointing in the right direction. Moving on to the motor and ESC set up – this is a full Spektrum System that includes a 1250kV motor and a 160A Firma SMART ESC. Both the motor and ESC have their own cooling fan to keep the temperatures down, which is needed as this RC car has a top speed of 90 km/h with the optional pinion; which is insane for an RC car of this size.

Arrma have tried to make maintaining your RC car as easy as possible with the removal of all the electronics being simple and straightforward. The first example is removing the motor. Arrma have incorporated a sliding motor mount that allows you to take your motor out in seconds. It’s as simple as removing two screws and the motor slides out, giving you access to clean your motor and change the pinion gear. Another convenient feature that Arrma have included is they’ve essentially made an electronics module, so the servo, ESC and receiver are all contained in one section that is removable as one piece. This set up with the sliding motor mount means you can have access to your electronics fast, which makes cleaning the monster truck thoroughly or swapping out any components a breeze.

The front and rear differential are the same and are removable in a matter of minutes. There is a quick access gearbox meaning you only need to remove the screws in the front, the plate comes off, and the diff ‘pops’ out, making tuning and maintenance simple. The centre driveshafts coming out of the front and rear gearbox have a unique design. We've put this in the maintenance category because anyone who has owned a car knows that checking screws is an important part of your maintenance. Screws come loose over time and ultimately, if you don't check your screws, you can ruin your day out having fun. Centre driveshafts are something that are normally attached with a grub screw that can become loose and fall out. Arrma have instead featured a captured joint that includes a circlip meaning you won’t need to keep checking your screws in the centre driveline. The captured joint will stay put until you take the circlip off to maintain it, which is easy with the included circlip pliers.

Durability is something that Arrma are known for. Ensuring that Kraton 8S is tough enough to be able to handle everything the customer throws at it – from extreme bashing to massive jumps and landings – is extremely important and Arrma have included the following features to ensure this.

Under the body shell is a small brace that keys into the rollover bar in the car. This helps prevent the shell from caving in the event of a crash and adds some structural integrity to the body shell. A tower to tower strut brace is featured which has become standard on the 6S 1/8th scale cars. In the 1/5th scale Kraton 8S, Arrma have taken this tower to tower brace a step further and added another two braces, creating a triangular set-up. Not only is there a tower to tower brace along the top, we now have a strut brace going from the rear gearbox down to the centre transmission and then one from the centre transmission going to the back of the front shock tower. This, coupled with the moulded side guards, provides extra stiffness to the chassis to prevent it from flexing and moving about on massive jumps and landings.

The chassis plate on the 8S Kraton is a 4 mm bent plate with added ribbing and bends as well as cap head screws that retain to a brace underneath the car, so not only is it bent but it also has an additional brace to minimize flex, increase rigidity and overall durability.

The suspension set-up on the Arrma Kraton 8S is certainly ready to take all the punishment you can throw at it with the large, 20 mm oil-filled bore shock absorbers that have the dampening and oil to deal with the weight of this huge 1/5th scale RC car on jumps and landings. These will keep the car nice and collected with its strong shock shafts and thick springs.

The top and bottom arm on this car are quite thick and are set up to deal with extreme bashing. Not only are the arms built to withstand the punishment, but the hubs are as well thanks to their thickness and pivot bore suspension. On the back side for the steering link, it sandwiches either side of the hub for added durability. Arrma have increased the size of the diff dramatically to deal with the torque and power that this 8S car has. The metal crown and pinion gears included are twice the size of those in the 6S cars, with metal outdrives and metal driveshafts. Everything in the driveline has been designed to endure extreme bashing.

I hope you have enjoyed this overview of the Arrma Kraton 8S. This monster truck is jam-packed full of features and specs, with some cool design ideas to assist with durability and maintenance. If you have any questions, please contact us via email, social media or by calling (08) 8186 4250 and one of our customer service team will be happy to assist you.