This weekend was Round 2 (out of 4) of the WA Challenge Cup, hosted by MORBC on the recent IFMAR worlds track. Aaron would go into Round 2 with a 4 lap lead in the overall series, over Harry Simms (Mugen Maxima).

Saturday was qualifying day and all the 'locals' were straight out on track going super fast after running lots of laps last weekend at the 1/10th Interclub. Aaron used his consistency, and the OS B21 TY2, to TQ round 1 of qualifying, but it wasn't going to be easy. In round 2, the track condition had changed and a few small errors meant Aaron was 3rd for the round, only a few seconds in it. Aaron went on to TQ Q3 and Q4 under lights with consecutive FTD's. In Q5 unfortunately a DNF due to a bad cell in the receiver pack. With TQ 3 out of 5, Aaron would start P1 in the second semi. Younger brother Ben, with some solid runs, qualified 9th, starting 5th in the same semi as his brother.

Sunday came around and was finals day. With both brothers in the same semi, Tom (the pit crew) was going to have his work cut out. Aaron took off from pole to take a convincing win, lapping all but 2nd place in the 20 minutes. Ben finished the longer run solidly in 4th. So, Dexter brothers starting out in P1 and P5, the 40 minute A-main was set. Aaron and Ben both got a clean start, but a small error by Aaron, meant he had to let P2 driver Harry Simms through into the lead. Back in the pack now, Aaron would take a further hit and dropped to 5th. Working his way back up to the lead wasn't easy, Harry was driving away on softer tyres, Aaron just had to get through the traffic and catch him again, knowing his harder tyre choice would come good later on. Ben's consistency was the best out of all the Amain drivers for the 40 minutes. Ben's fuel mileage with the OS B21 Drake Edition was superior to everyone else, doing 8 minute stops comfortably, rewarding him with a 4th place finish, just off the podium. Aaron eventually caught and passed Harry, to lap the field twice apart from Harry who was 28 seconds back. A great race for sure.

The Hitec 9370 servos in Bens car only consumed 200mah in the 40 minute Amain, incredible power and economy. Aaron maintains the series lead, although only by 1 lap, due to his Q5 DNF. This sets up an exciting Round 3 in Esperance and Round 4 in Perth, to come later in the year! 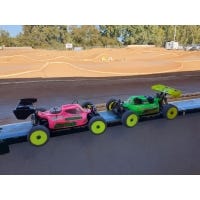 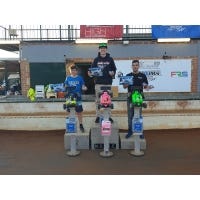 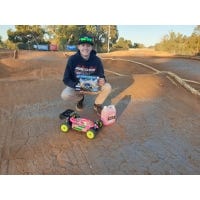