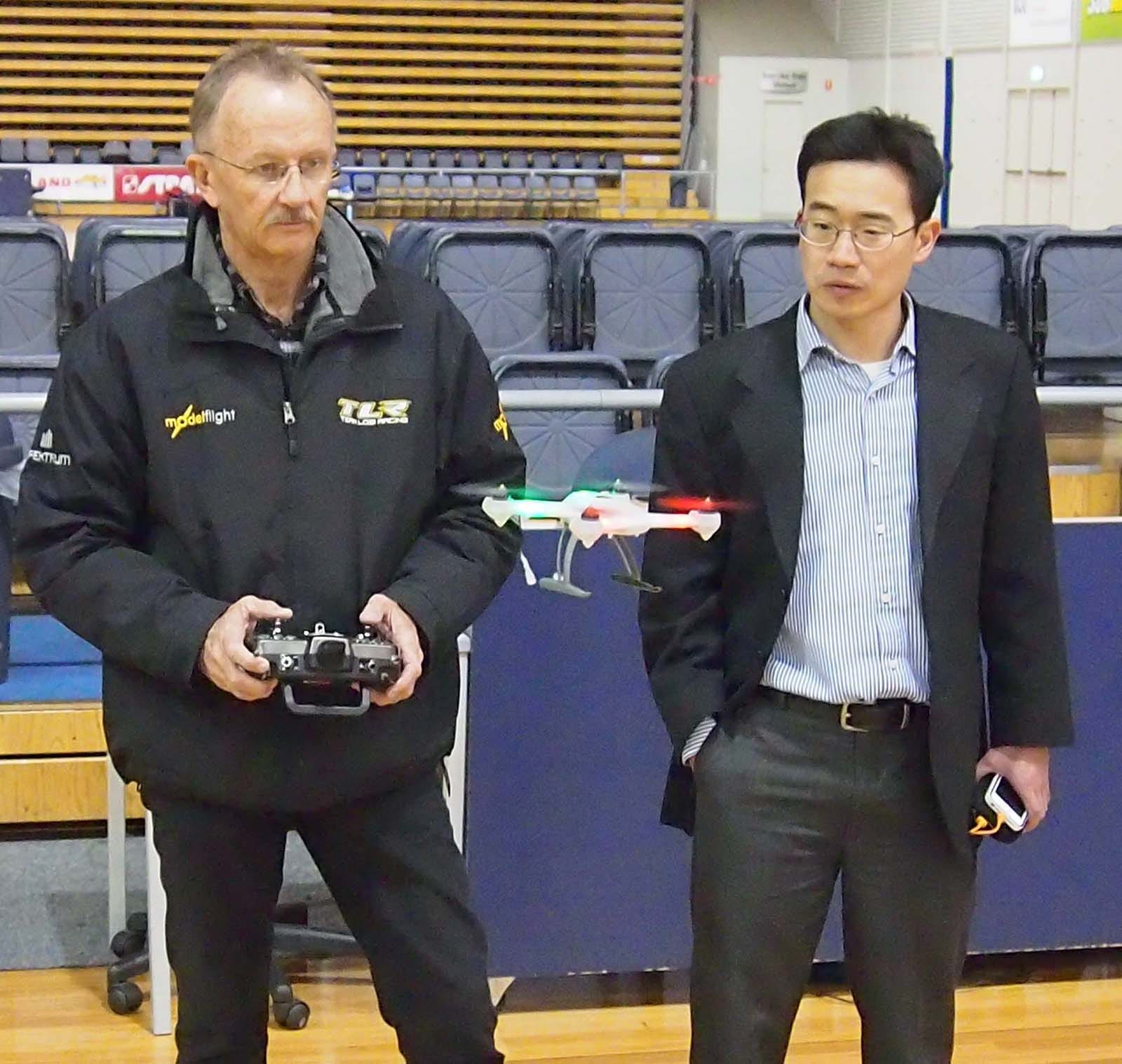 After discussions with several of our Indoor Fliers, it seems that they all credit the increase in flying numbers to the earlier flying times of 7.30p.m. to 9.30p.m. A heartening release from our worries as to why they seemed to be dropping off.

I begin this "Phoenix" article with some intimate details on Mr. Robert McEwin.  No! Please don't send the children outside - they are not THAT intimate.  Pictured here as my opening shot, Bob is the Editor of the Masa-mag and he speaks with a lot of authority gleaned from his years of model making as well  as one of this State's premier fliers. He is a dedicated member of the Holdfast Club  where he flies frequently and also one of the leading local fliers at the Sensational Model  Aero Events at "Conny." 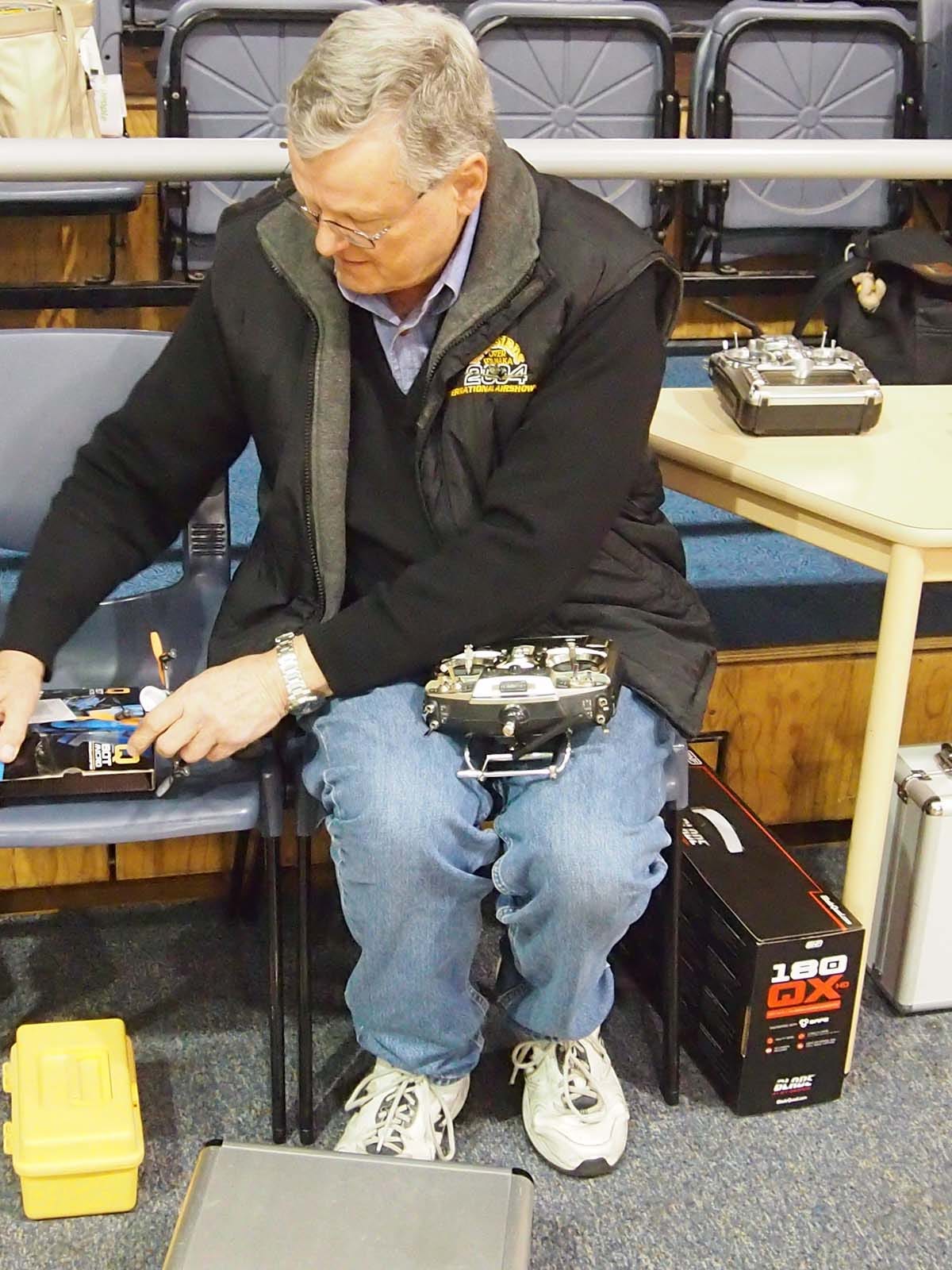 Okay that is a "lead-in" to the gentleman whom, this night, flew a model helicopter  further and longer than he had ever done before. It is a fairly ordinary looking heli, as this picture shows it in flight but, in accomplishing this latest success, he really was  enthralled with his efforts. 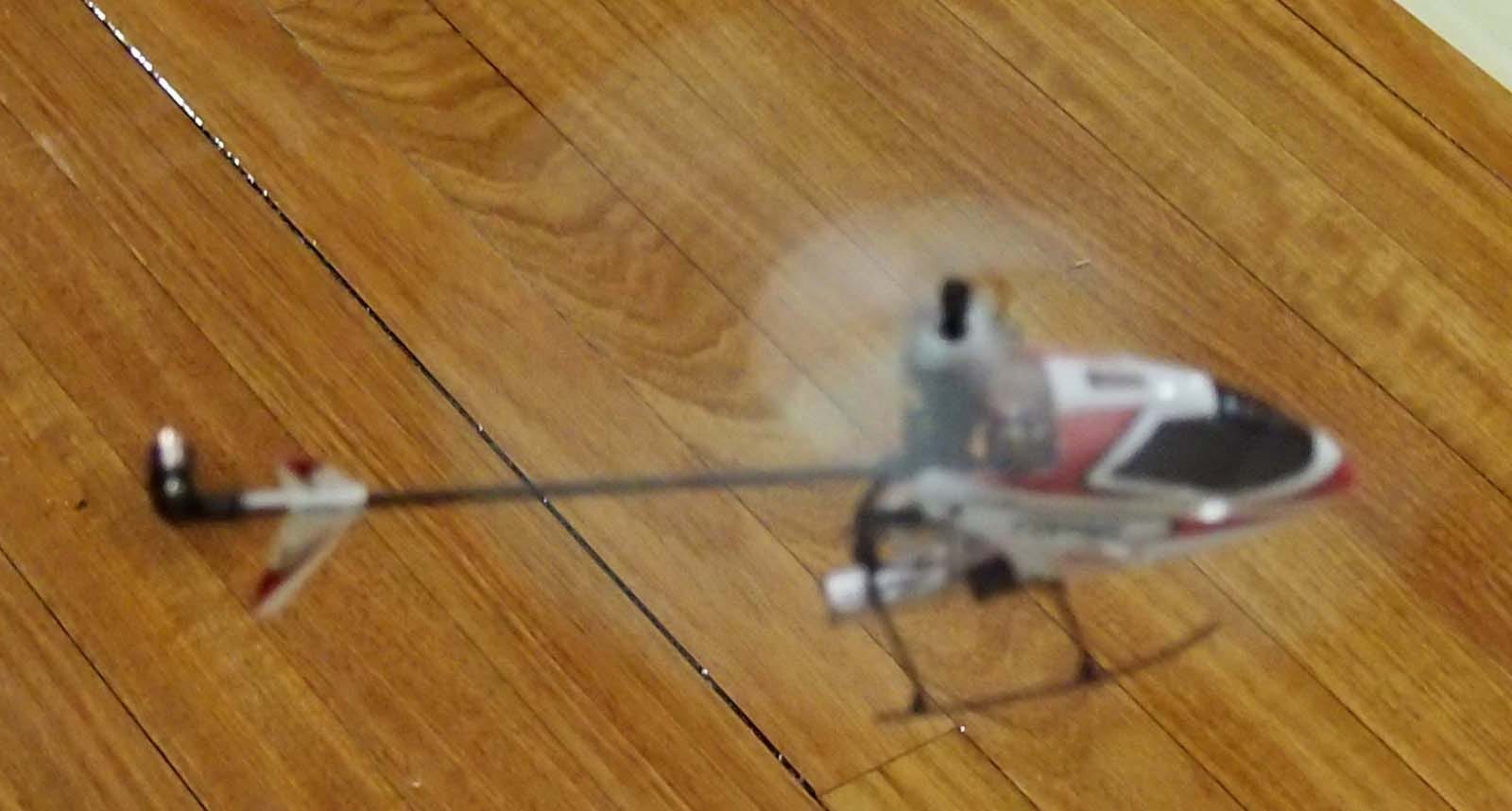 Your friendly Phoenix broke out with a new and, I might add, highly successful little  Quad-copter.  This delightful model from Horizon, through Model Flight, is a Blade 180QX and I purchased it, due to my long-time satisfaction with my DSX9 transmitter from Japan Radio, in BNF configuration. 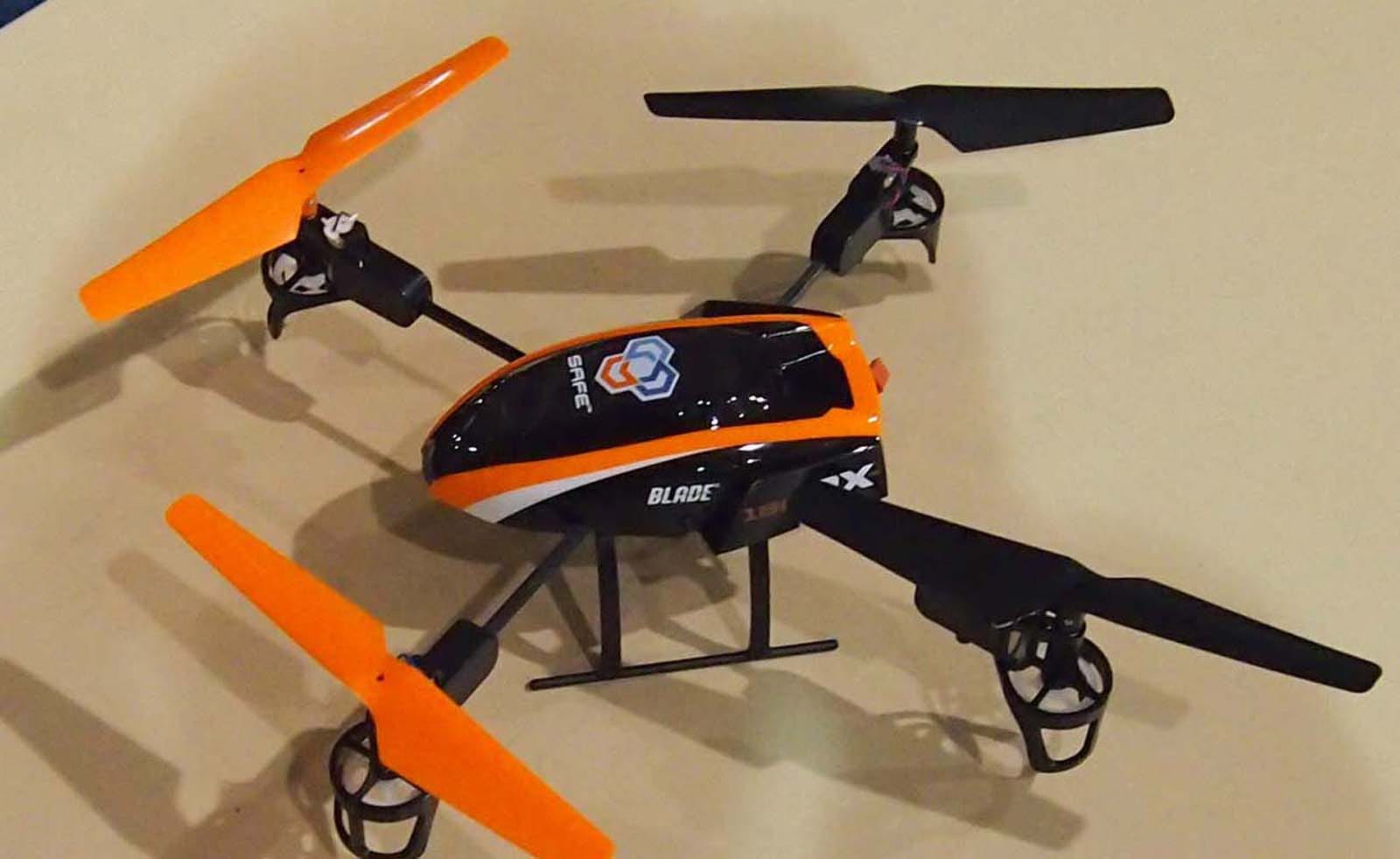 As I had not made a lot of progress with my former and smaller Quad whose size caused problems for my ageing eyes, Michael O and  Brian "soft" set it for me and it has suddenly transformed me into one of years experience. From the picture, you must agree that it is an attractive looking beasty.

Some of you may recall that I have previously mentioned Robert's model which he fitted with rubber duck feet for landing and taking off from water. With this very cold weather ... no thanks!

In my following shot, you will see Michael, on left - need I say, and Chuckie who is often  busy video-ing stuff   for "the firm."  It is hard to get a shot without him but, please dear readers, be grateful that I am not filming this with sound. Chuck was Michael's part carrier on this occasion and he toted this delightful model of the infamous Corsair that "The Boss" later demonstrated with his usual flair. The Corsair has always been an attractive aircraft. 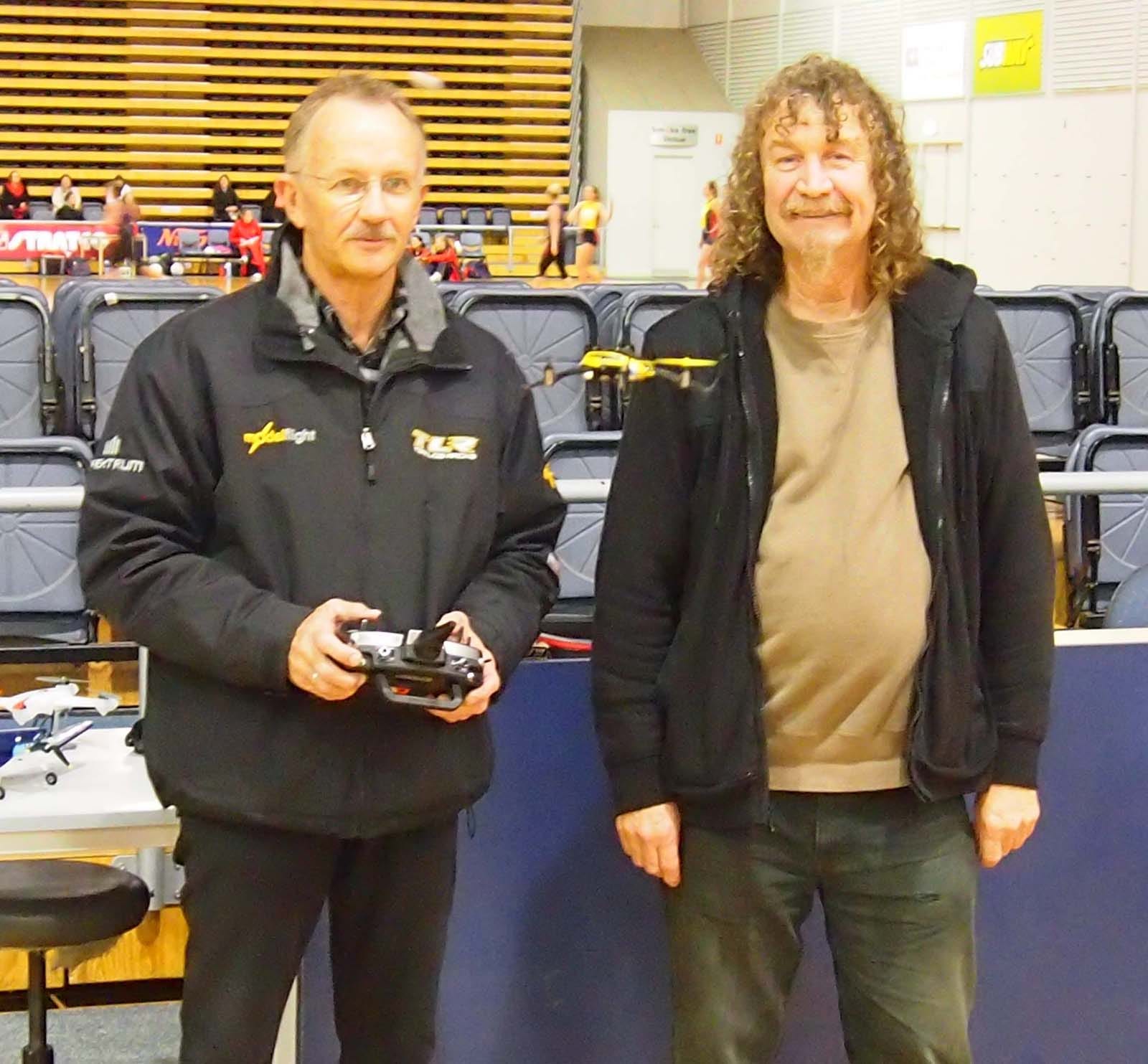 Some may have seen the afore-mentioned Bob McEwin flying his beautifully finished red Corsair at the air races and this little model of the real thing was finished in blue colour, but still looked delightful at ETSA Park. 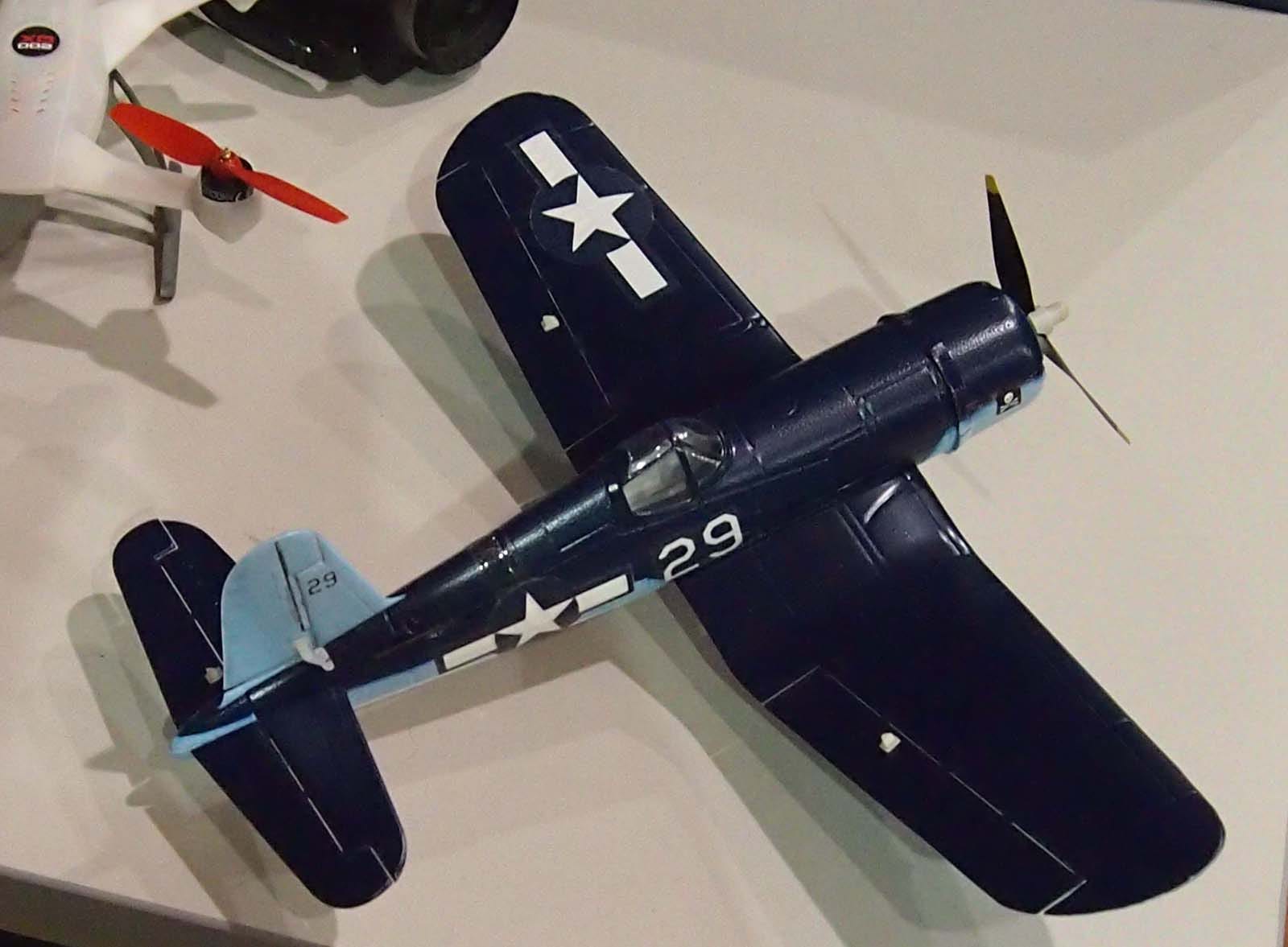 I must admit here that one of the most impressive moments on this evening was to see,  not only Andrew Pile flying but also his five-year-old son who handled his little Blade MQX Quad with the smoothness and skill of many fliers who would be his senior by many years. Well done to our latest and youngest Indoor Flier, whom you see here with his proud dad, Andrew. Congrats also to Andrew. 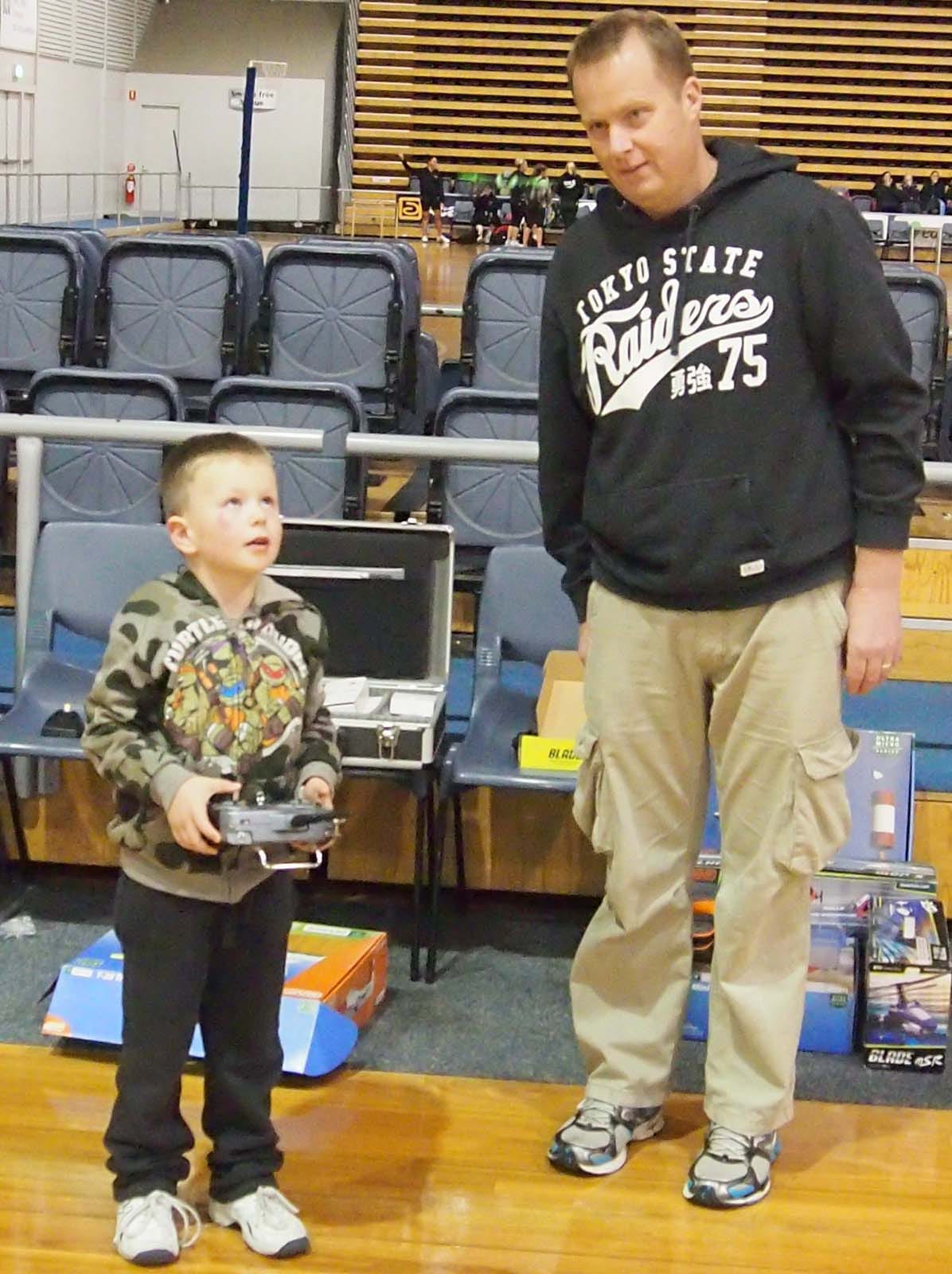 I have included the following shot, which I entitle "concentration." I do not think that it needs any further comment from this scribe. 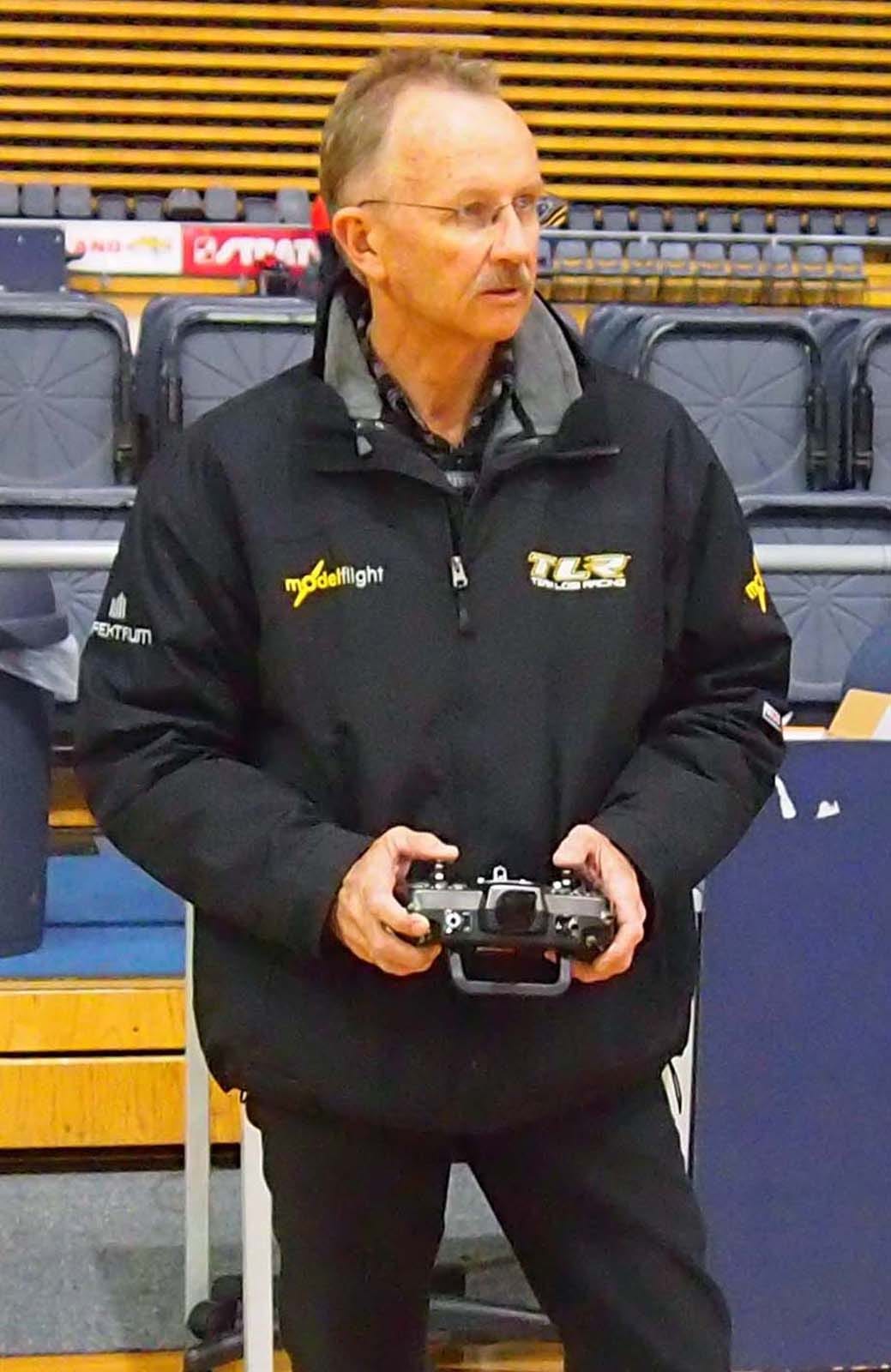 Do you recall, dear readers how I spent several lines of last month's Phoenix story on the devastation that we suffered when cracks appeared all over the stadium. They had names like Mike's Crack and J.J.'s Crack. Well folks, this month we had one appear on one of the heavily advertised walls. The proof is in the picture and here you see Mike's crack stuck hard to the wall. I have not heard that it will be moved before next Month. 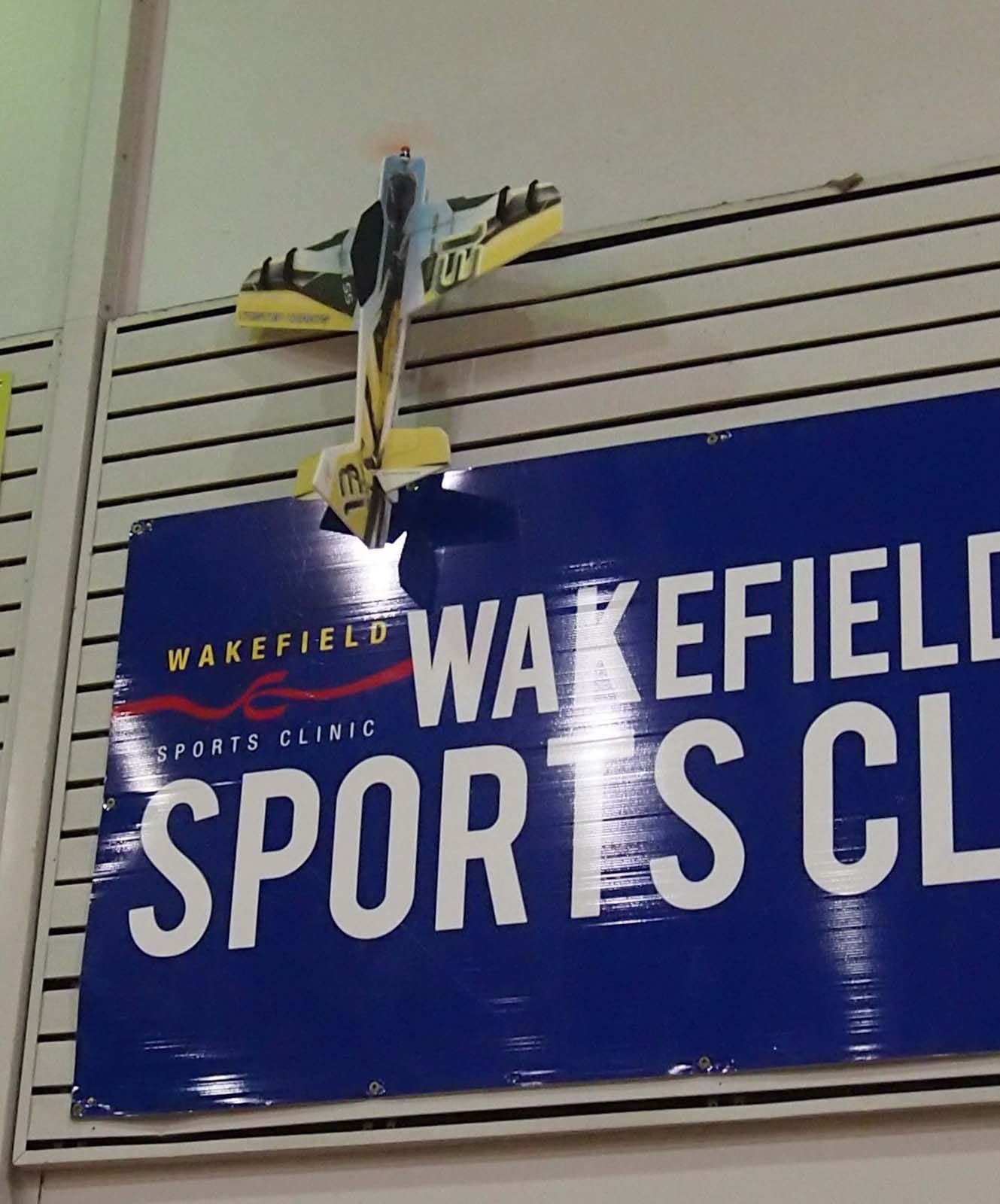 In my next pix, titled "Three Wise Men" the two on the left are both familiar to you all, but we were honoured by a delightful gentleman from overseas who showed enormous interest in both our models and who was flying them.  Whilst he was not wearing a coat of many colours, his name is Joseph and, although he will be away, as will Michael O, Joseph will return in time for our August  fly-in and I, for one, look forward to his second visit. It would not surprise me if he returned with a model. 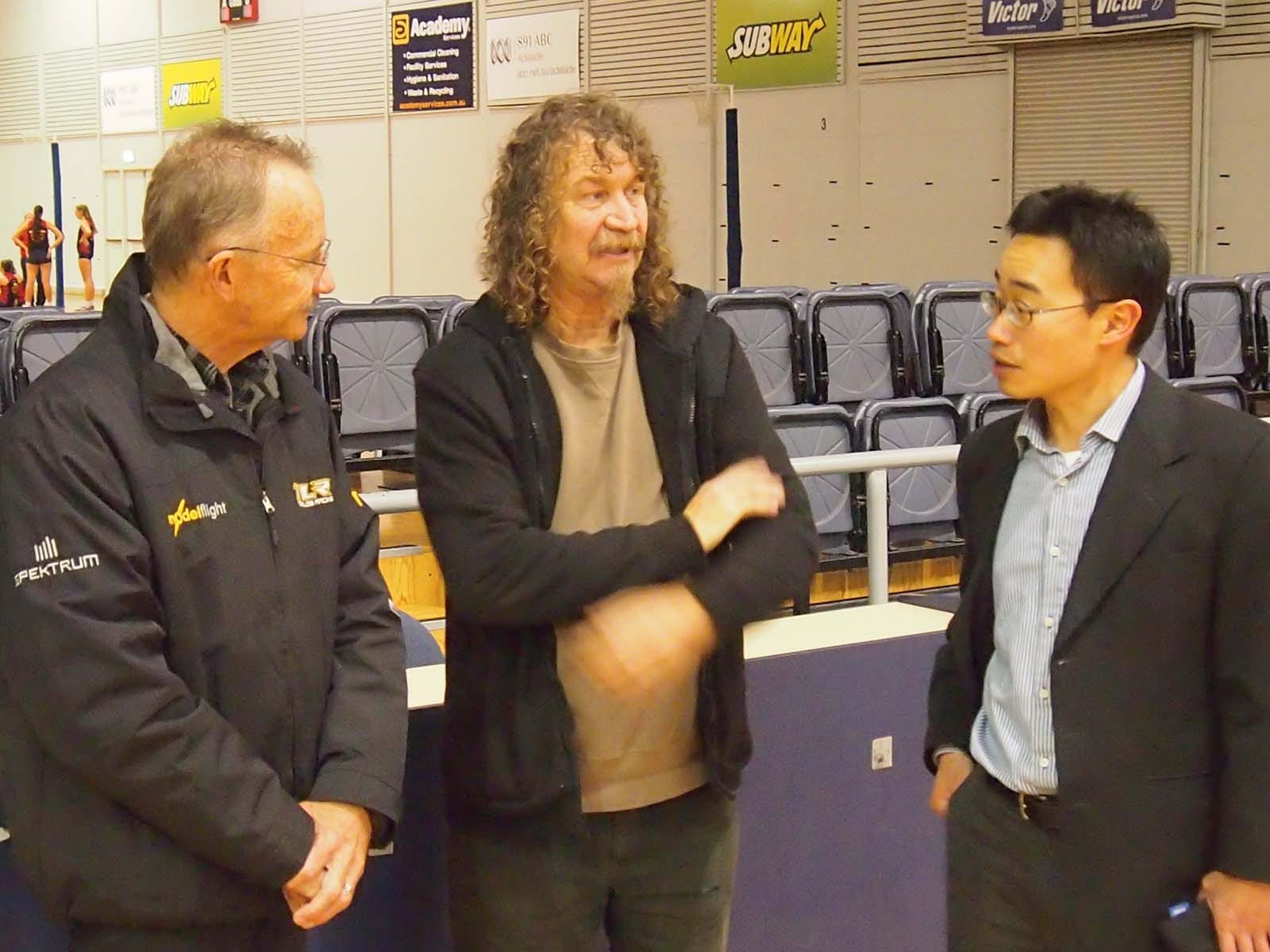 You'll see that Joseph also showed a lot of interest in Michael's other Quad, the Blade 200 QX. I did not seem to get sufficient time to chat Michael about this model but found it to be enormously heavy and  was informed that the four motors were "quite" powerful. It can be seen, lights and all, hovering between Michael and Joseph.

I do not usually feature pictures of the Phoenix with these stories but, as he was both pleased and proud of, and with, his new Quad. I could not help it and you see him here with both his Horizon Quad 180 and his trusty JR radio, the DSX9. 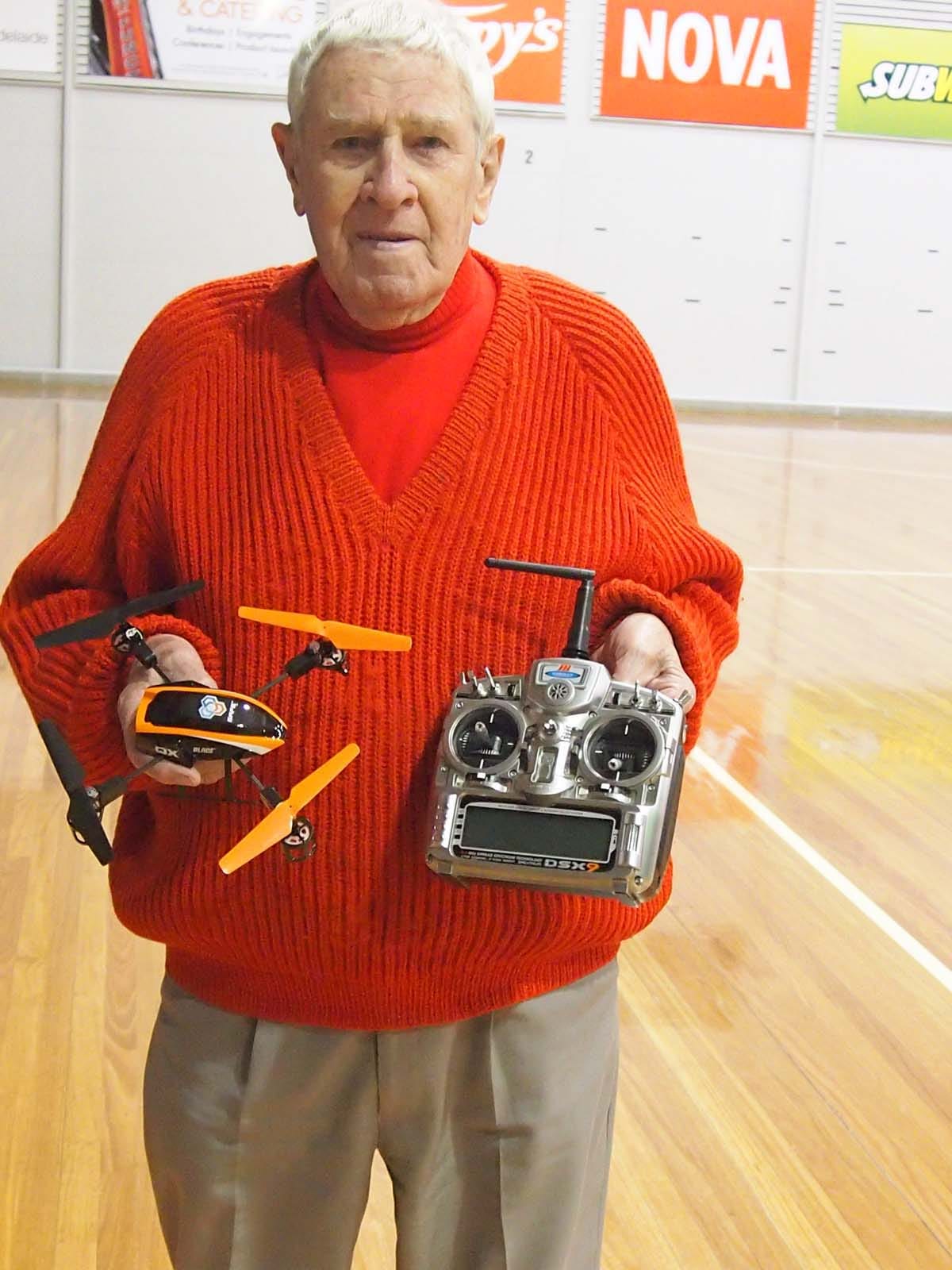 I told you of my extreme pleasure that I derived from my flying success of the night and I found another interesting person in Carla Borego, one of Australia's leading Netball goalshooters.  I invited her to come and try with my quad but she replied that, although she was very happy for me, she would just stay where she was and watch from there. As I walked away, I realised what a strain it was on my neck after speaking with her for a while.

Warm greetings to all from your friendly Phoenix.