Over the last couple of months, I have been moaning and groaning regarding the lack of fliers, lack of income which meant Michael and Model Flight had to make up the short fall for the monthly rent. As the gorgeous lady who presents information for Ford Finance says, "This is true."  Now, I hope, we have entered a new world with larger numbers of happy fliers.

Personally it gave me a huge lift to have the Jacobsen family join us , and please permit me to itemise even further, and make special mention of Shaun. It seems that  for quite a number of years I have had the pleasure of following Shaun's model flying career in a somewhat mild, "behind the wings" manner, and as I had been moving in different circles , lost track over the last couple or more years.  So it was with great pleasure that I welcomed him to our magnificent Indoor Flying venue on Thursday, the 15th of January.

My first picture is of a somewhat laid back (not that this is unusual) father of the two boys, Tom Jacobsen. Tom has built quite a name for himself over the  last few years, particularly,  in flying Pylon Racing, although if I were to mention his many facets of flying, there would  remain little space for anything else. Even so, it is a quite common sight to see him standing beside his friend and fellow Pylon Flier, Bob McEwin for they are both avid Pylon Race competitors. It seems though, that as quickly as Bob can create new models on his router (I got it right Bob, tis a router, not a laser) the high degree of competition in this field calls for a  replacement. 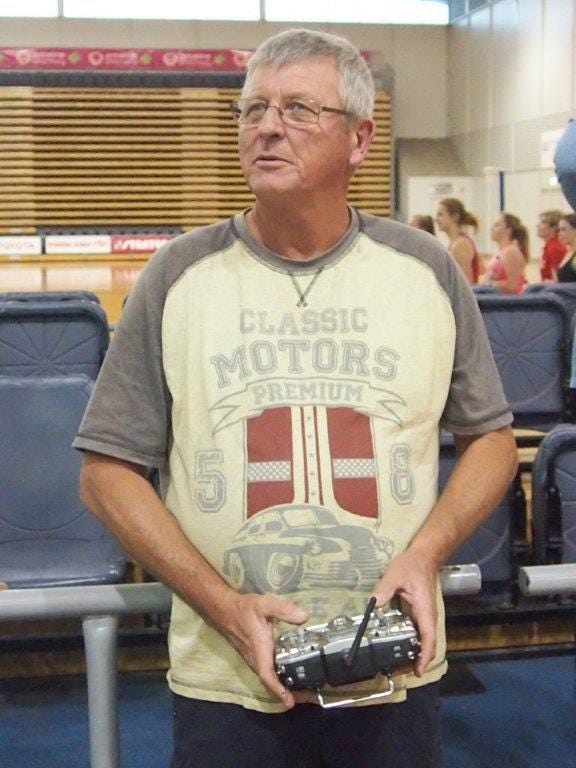 The gentleman on the far right of my next print is of Rob Tiver. OK, it means little to any of my readers and the reason for that is that Rob was viewing Indoor Flying for the first time and gollee, his interest in the activities was unabounded. I was pleased to give him a "close up and personal" viewing of a number of the models and point out their working parts. 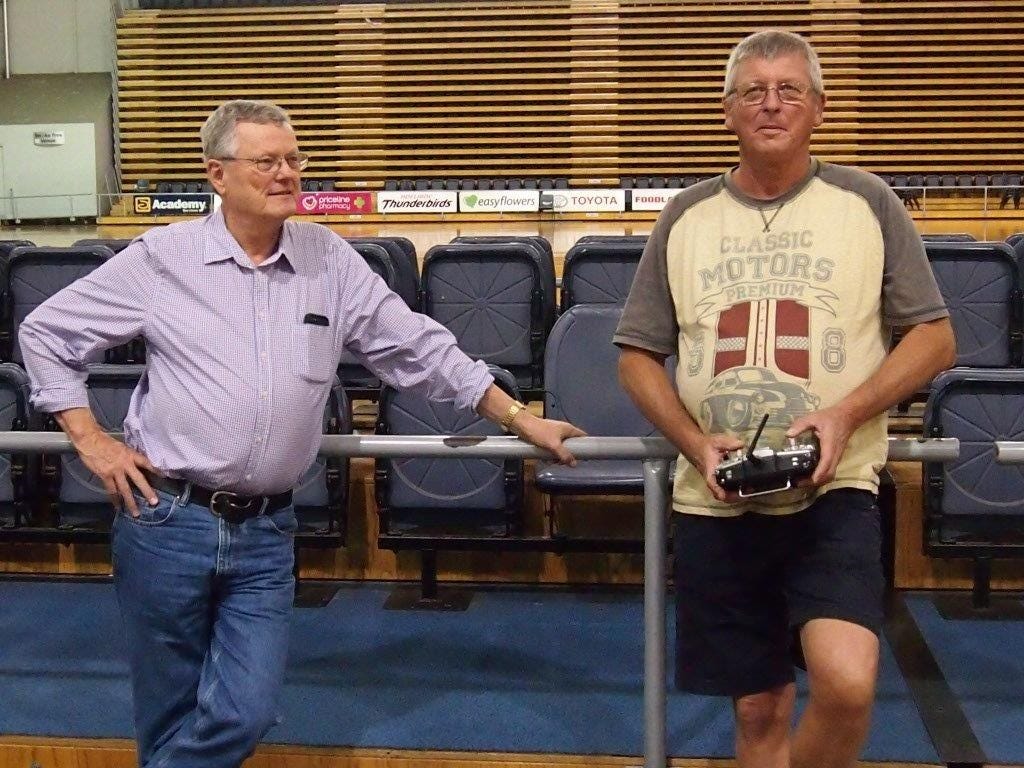 He was  attending in the company of his good friend, Noel hurd, a motor-racing gentleman of quite high standing, his wife Janice and Rob's wife. It was great to have some folk in the audience area. 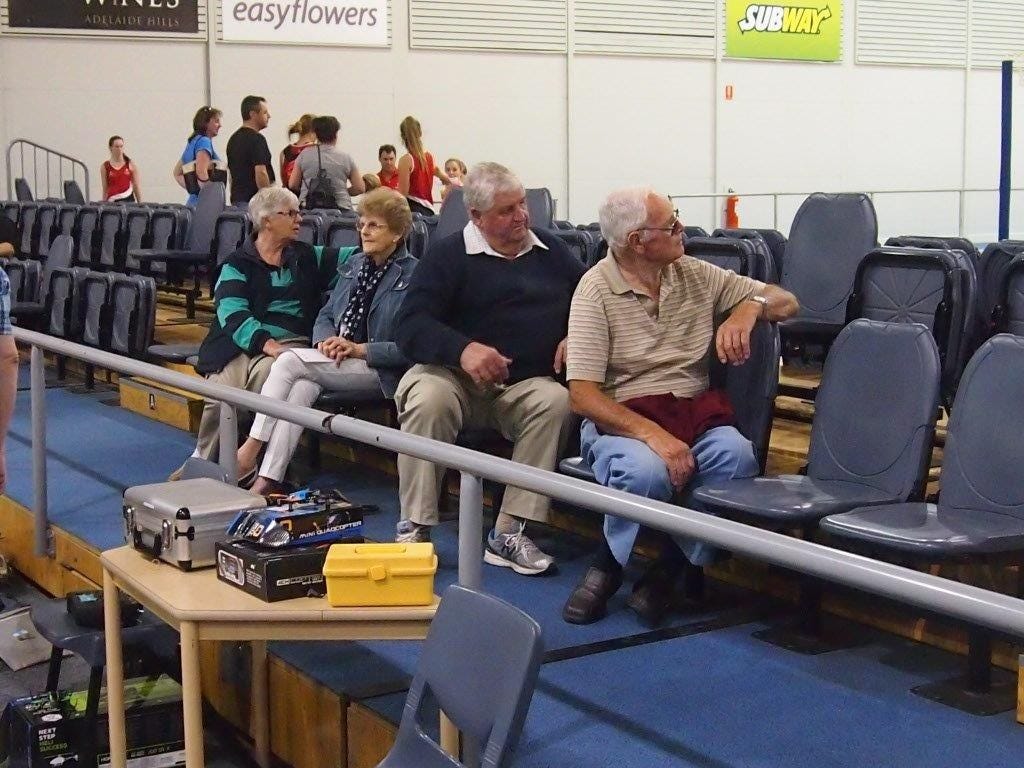 It would be great to see these areas being  used by more friends of the fliers because it is a great night's entertainment without any cost.  I would like to thank the many owners of models who gave me a free hand to display their aircraft and other equpment.

My next picture is of Greg Leigh. Greg's father, David, has more fame, or as  much "flying fame" hovering over his shoulders as that of Tom Jacobsen and has been around flying fields for a similar number of years. Someone asked the question of  Greg, "Do all your models scream?"  I must admit when a model screamed overhead during the night's flying, one could be fairly sure that it was one of  Greg's and that it was being flown at the highest degree  of its flying ability. 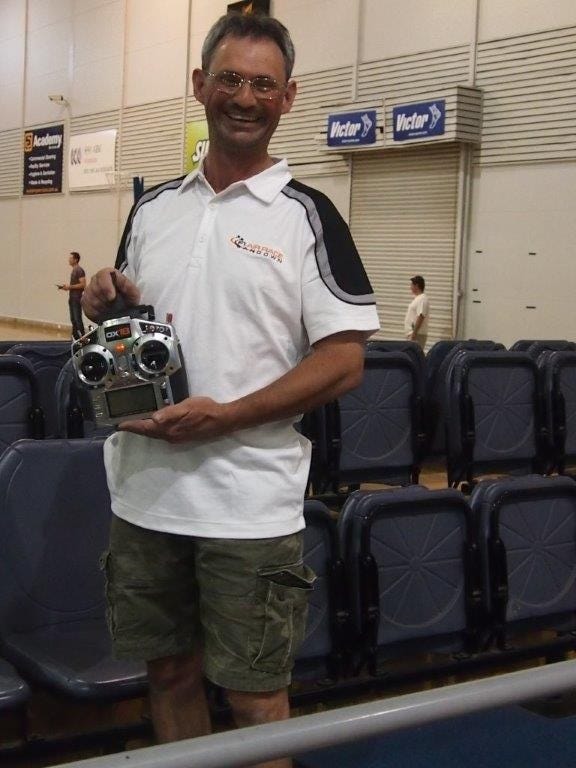 My final pix for this month shows the three excellent fliers during one of their stints and are pictured from the left. Greg,  Jarrad and Shaun. A magnificent  trio of excellent model fliers. 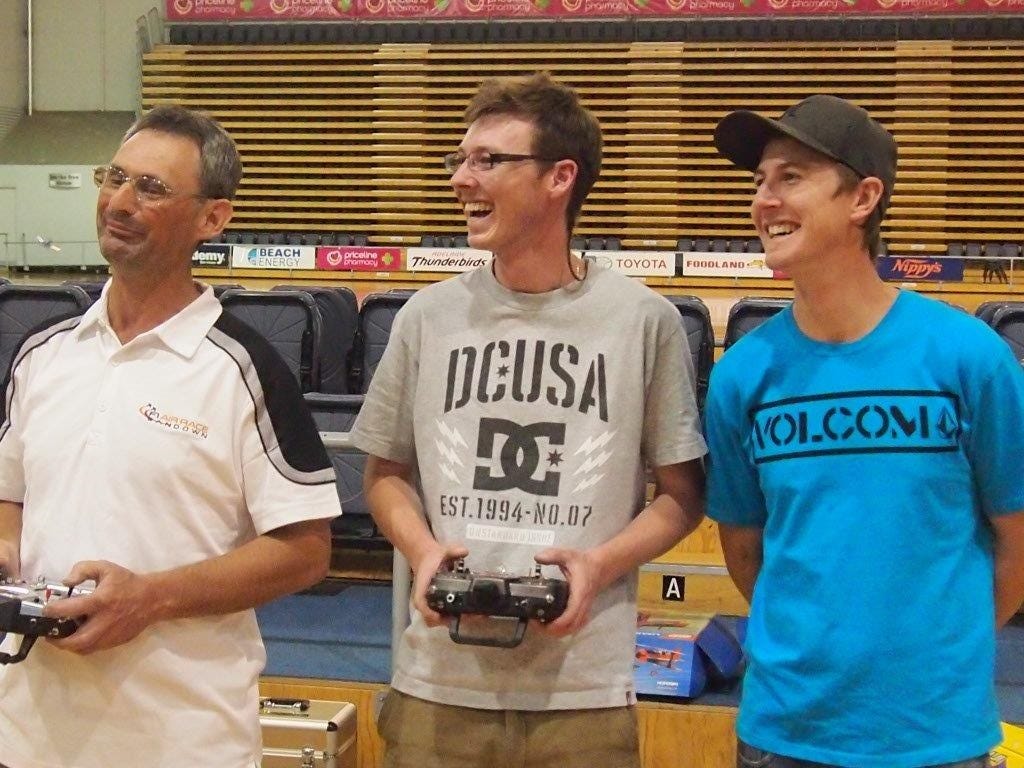 Please keep in mind, dear folks, that we fly on the 3rd Thursday of each month, unless you read differently in these columns, and, right throughout 2015 we will fly from 7.30p.m. to 9.30p.m.  and, even though our monthly rent has been increased this year, if you fly, it costs $10.

If you come as a spectator, it is free and all are most welcome.