Hot off the release of their UM P-51D Mustang, ParkZone have released another (and slightly larger) warbird - the Focke-Wulf 190A-8. If you are a fan of scale RC planes, take note. The Parkzone Focke Wulf showcases intricate details that make it look like the full-size version flown during World War II. We were fortunate enough to get a sneak preview of this new ParkZone plane and we put together two videos for Modelflight's YouTube channel. In the first video, Matt unboxes and reviews the Focke Wulf:

As you can see, ParkZone have done exceptionally well with the scale detail of this RC plane. With a functional engine fan, panel lines, pilot and cockpit details, the Parkzone Focke Wulf 190 is an impressive model. Even the trim scheme reflects that which appeared on the full-scale plane flown by World War II ace, Kurt Buhligen.

ParkZone have created both a BNF and PNP version of the Focke-Wulf. As such, there will be some assembly required (less than one hour though). 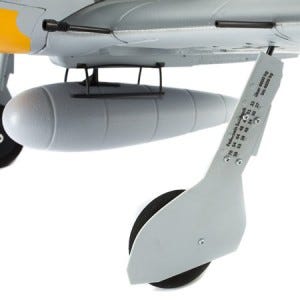 With a powerful 15-size 950Kv brushless outrunner motor installed, you this RC plane has the performance to match its appearance. In order to complete the Parkzone Focke Wulf, you will require a 4+ channel DSM2 or DSMX transmitter. We would recommend a 6+ channel transmitter, such as the Spektrum DX6i, so you can operate the optional tank release and retract system. We would also suggest the use of the 2200mAh 3S 30C LiPo battery from E-Flite and the ParkZone LiPo charger. The FW 190A-8 is another exciting release from ParkZone. If you cannot wait to experience this RC plane in all its glory, visit Modelflight today.