Next Generation Innovation - the Spektrum iX20

The level of powerful features and technology in the Spektrum™ iX20 Smart Radio has surpassed that of its predecessors, the DX20 or the iX12. With a wide array of upgrades and innovations Spektrum have put out the most powerful 20-channel feature packed air transmitter that it has ever released. The most obvious advance is the colour touch-display with a big 5-inch screen featuring the latest Android technology.

One of the more subtle advances with the Spektrum™ iX20 Smart Radio is the improvements in the stylish finish and ergonomic design that Mirco Pecorari and AircraftStudioDesign have come up with. Combining their own RC pilot experience with ergonomic styling principles has produced a transmitter that gives the pilot advanced and precise control with smooth handling Hall-effect gimbals that are front access adjustable. The level of user-adjustable features on this radio enables you to customise functions such as mode configurations and switch assignments and set up the functionality to best exploit the speed and precision of the DSMX Spektrum technology at your fingertips.

Upgrading through the Spektrum AirWare App is now easier with a more user-friendly interface and new speech-to-text functionality. If you want to set up customised reports, telemetry warnings etc. you just need to talk to your iX20 and it will listen. 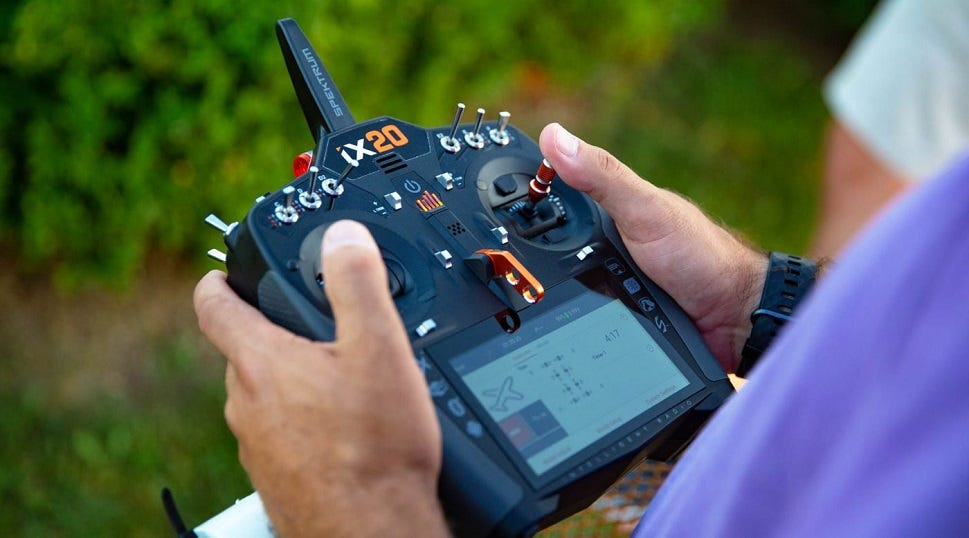 The Android powered 5-inch touchscreen on the Spektrum™ iX20 Smart Radio is super responsive going from off to fully on in 30 seconds and waking from sleep mode in a second or less. With a processing speed that is 250% faster than the iX12 you will receive your on-screen information almost instantaneously allowing for quick and precise changes that will take effect instantly. Access to an evolving list of apps from the Google Play store is just one more advantage you get from having a fully functional Android interface.

The Spektrum™ iX20 Smart Radio gets even smarter when you connect to wi-fi. You’ll get automatic updates on Spektrum AirWare, along with the ability to download third-party apps and model setups. Almost any bluetooth device will connect to the iX20 meaning that earbuds can be used for voice alerts, listen to music etc. You can charge the internal Li-ion battery through the micro USB port using an ordinary USB to Micro-USB cable as well as link up to your laptop or PC, connect flight controllers, and, recognize accessory devices.

With Smart batteries, ESC’s and receivers your Spektrum™ iX20 Smart Radio can communicate effectively with them all giving you updates on critical information like motor temperature, air speed, battery voltage and more. All this information is available to you on your Android screen with instantly updated telemetry data displays, or, you can set up your voice alert system to keep you updated when certain limits and values have been reached. Smart technology enables you to customise what information you receive, how you receive it, and, what it looks and sounds like.

The integrated auxilary serial port on the Spektrum™ iX20 Smart Radio gives you the ability to access an alternate RF system. The TBS Crossfire CRSF protocol is one such system you can use with minimal effect on latency performance.

What once required a PC, mobile phone, cable or Bluetooth dongle can now be achieved using the Forward Programming technology in the Spektrum™ iX20 Smart Radio. You can now configure Smart receivers directly and wirelessly from your transmitter. Using Spektrum AirWare firmware language also means that Forward Programming is now easier to use.

Rather than landing to make an adjustment, or, having to access a menu while trying to fly at the same time you can now use the On-The-Fly fine tuning function. This enables you to adjust mixes and values by using one of the four non-primary trim controls available to you to host this function.

Juggling models between the transmitter memory and either SD cards or Bluetooth memory devices will be fairly rare with the Spektrum™ iX20 Smart Radio’s large 250 model internal memory capacity. You can transfer models between Spektrum brand radios and sharing between ‘G2’ system and iX-series radios is made easy via Bluetooth or SD Card.

Note: The iX20 can import SPM and iSPM file types, but can export only iSPM type files.

Linking up with other Spektrum transmitter users for training purposes with your Spektrum™ iX20 Smart Radio is simple using the wireless trainer link. Using ModelMatch technology once two transmitters are bound will allow the iX20 to re-link without having to repeat the bind process again.

With Wireless Trainer Link, You Can: