E-flite have delivered an impressive scale version of Russia’s Sukhoi Aviation Corporation’s Su-30 twin-engine multirole fighter with the Su-30 Twin 70mm EDF jet. With unique features and flight characteristics this rarely modelled EDF RC jet fighter will bring a level of scale detail to the airfield that will turn heads. The large scale of the aircraft, the highly detailed retractable landing gear and the functioning air brake are features that when combined with the twin EDF power system, produce blistering speed and a turbine-like sound. The trim scheme on the Su-30 is from the Russian Falcons squadron and adds to the authentic look and flight visibility. 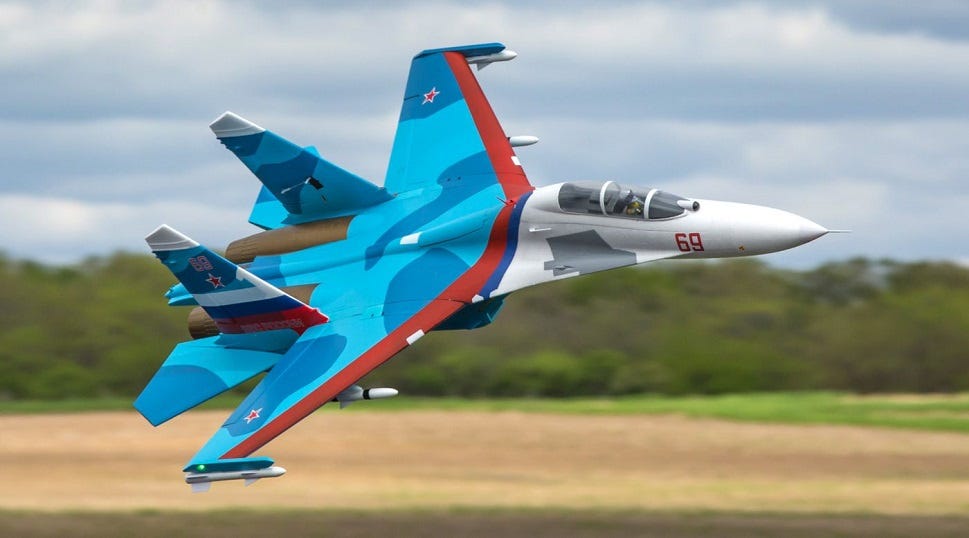 When the twin EDF units on the E-flite® Su-30 Twin 70mm EDF jet run in sync it will sound like a turbine-powered giant-scale jet roaring past you. With a 6S 5000-7000mAh LiPo hooked up to 80A ESC’s, the power running through to the brushless inrunner motors will propel the 70mm 12-blade fans at an impressive speed. Along with the speed comes superb vertical performance and precise control delivered by ten metal-geared servos with ball-link equipped linkages. The number of functioning scale features on the E-flite® Su-30 Twin 70mm EDF jet includes an LED navigation and landing lights, sequenced gear doors, a deployable air brake, full flying stabs and shock absorbing electric retracts that include trailing link nose gear so you can fly the Su-30 from a number of different surfaces. While the functioning scale details provide the performance, the additional details will turn heads with removable optional-use ordnance, moulded-in hatches and panel lines, detailed cockpit features and a unique trim scheme that provides high visibility and a detailed factory applied finish.

The Spektrum DSMX receiver fitted in the E-flite® Su-30 Twin 70mm EDF jet features the AS3X (Artificial Stabilization 3 aXis) system that nullifies the effects of turbulence and wind by working behind the scenes to provide increased precision and stability when your RC plane experiences non-optimal flying conditions.

SAFE Select is optional technology that gives the E-flite® Su-30 Twin 70mm EDF jet an extra margin of safety by enabling features that will ensure your flight envelope is limited to keep you out of trouble until you are a better flyer or have familiarized yourself with the controls. No programming is required to engage SAFE Select as it is built into the receiver. You just need to follow the manual directions and change up the binding sequence to switch it on.

With SAFE Select enabled, you get:

• These envelope limits keep the airplane from rolling or pitching upside down. They also prevent excessive climb or dive angles.

• The airplane instantly returns to and holds level flight when the sticks are released and in the centre position. It’s also helpful for keeping the wings level during takeoffs/launches and landings.

• The simple procedure for assigning a transmitter switch to turn SAFE Select features on and off doesn't require any programming and takes just a few seconds.

If you don’t want to enable the SAFE Select features, just bind the receiver normally and it will function like a standard AS3X receiver.

With servos, power system and a 2.4GHz Spektrum receiver already installed all you need to do to get your E-flite® Su-30 Twin 70mm EDF jet into the air quickly is just bind the receiver to a compatible transmitter, complete any final assembly you might need and then you are good to fly!