The F/A-18 made its first flight back in 1978 and has been updated since to become a staple in the U.S. Navy and Marine corp air arsenal used as both an attack platform and a jet fighter. E-flite have brought this jet fighting classic into superb scale life with the F/A-18D two-seat variant that is based on the US Marine Squadron 242 affectionately known as the ‘Bats’. The factory-installed colour and trim scheme is the same used by this squadron and adds to the realistic scale effect. Designed and built with the experienced RC pilot in mind, the E-flite® F-18 Hornet 80mm EDF comes with a host of working scale features including full flying stabs, operational flaps, factory-installed LED lights and more. 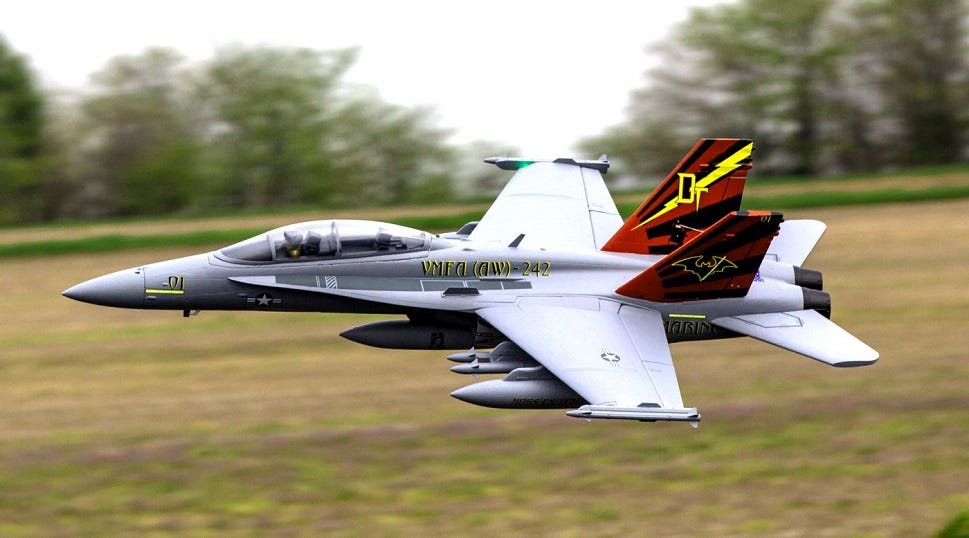 If you pin the throttle on this RC jet fighter you will see an immediate response as the 12 blade 80mm V2 fan, the brushless inrunner motor and the 100 amp ESC combine with your 6S LiPo battery of choice to bring you awesome vertical performance and blistering speed. You can also expect longer flight times and better performance than larger models with compatible 6S power systems. Throw in the realistic turbine-like sound as the E-flite® F-18 Hornet 80mm EDF whistles by and you’ve got a real head-turner on your hands!

Paying tribute to the U.S. Marine Corps VMFA(AW)-242 “Bats” squadron the factory-applied decal and paint finish gives you excellent visibility in the air and is bound to catch the eye of others around the airfield as well. The extra scale details on the E-flite® F-18 Hornet 80mm EDF include removable drop tanks and ordnance, moulded-in panel lines and hatches, painted landing gear, plus more. On top of that you get functional working scale detail in the form of full-flying stabs, factory-installed LED lights, operational control surfaces and flaps with pocket hinges, and, sequenced nose gear and main gear.

The fully moulded EPO foam construction of the E-flite® F-18 Hornet 80mm EDF allows for complex shaping and details to be included in the tough but lightweight form. As a result, you get a very easy to maintain RC jet model and a brilliant flight experience. No matter what speed you get your E-flite® F-18 Hornet 80mm EDF up to the metal-geared servos with ball link equipped linkages have been factory installed to ensure you maintain precise control.

The two-piece wing plus the stabs bolt into place and can be assembled and removed very easily making it easy to transport and store this RC jet.