Due to its aggressive look, the USAF’s A-10 Thunderbolt II was affectionately given the nickname of the Warthog. The A-10 was the primary Close Air Support aircraft for ground forces in a number of theatres of conflict. Its ability to take fire and survive while delivering a highly accurate weapons capability quickly gained it the respect of enemy and allied alike. The painted teeth nose of the A-10 Thunderbolt II was fitted with the 30mm GAU-8 Gatling gun that could deliver 30 rounds per second of armour-piercing incendiary rounds. This iconic aircraft has been faithfully reproduced in scale form in the E-flite® A-10 Thunderbolt II Twin 64mm EDF. Delivering unlimited vertical performance and an impressive top speed the A-10 also features superb handling with both SAFE Select and AS3X technologies working with the pilot to make flying easier. 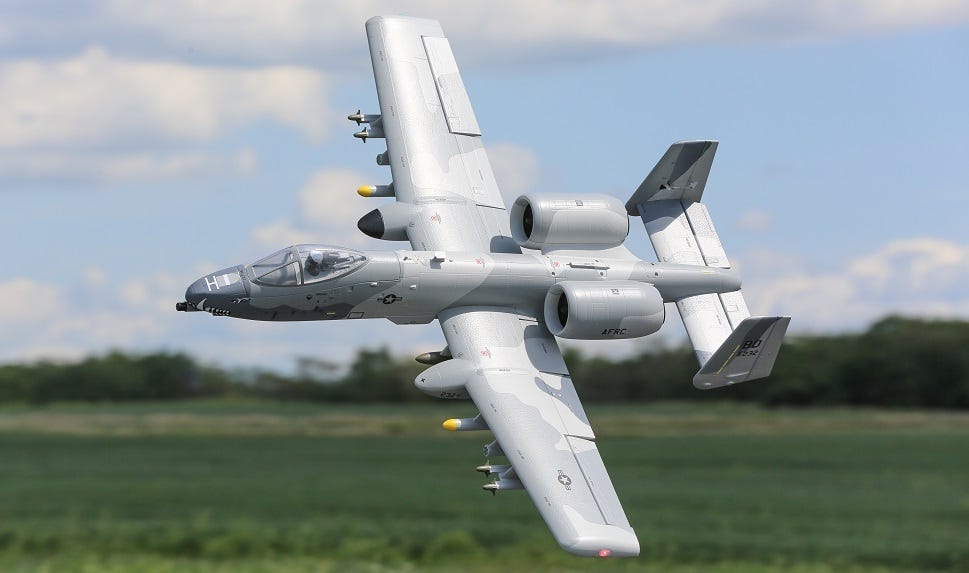 The E-flite® A-10 Thunderbolt II features an all-new design with twin 64mm 11-blade fans powered by powerful brushless motors that have been paired with 40A ESCs. These are wired to a 6S 3200-4000mAh LiPo battery and can get this RC fighter jet up to speeds of 160kmh in level flight. With near-on instant throttle response, class-leading flight times and brilliant vertical performance the E-flite® A-10 Thunderbolt II Twin 64mm EDF will not disappoint. When you have this modern-day RC warbird cranked up on a fly-by you will hear the awesome sound it produces that almost replicates that of a real turbine engine. The A-10 has ball-link equipped linkages on all nine of its factory-installed digital servos that ensure top of the line control and precision at every speed.

The fully moulded EPO fuselage construction enables E-flite to replicate a couple of things – the scale shapes and details of the Warthog’s full-scale counterpart in a lightweight form. Plus it is also a nod to the A-10 Thunderbolt II’s renowned ability to take punishment from ground fire. In other words, it will handle a few rough landings in its stride. The list of functional features on the E-flite® A-10 Thunderbolt II Twin 64mm EDF is extensive with operational flaps, twin rudders, LED navigation lights and electric retracts with shock-absorbing struts so you can take off and land on a variety of surfaces. Detailed scale features include moulded in panel lines, removable ordnance, detailed cockpit with a pilot figure and more. Giving you’re A-10 that real battlefield look is the factory finished three-tone grey ‘Flipper’ camouflage trim scheme that looks fantastic in the air or on the ground. The E-flite® A-10 Thunderbolt II Twin 64mm EDF comes in a very manageable size so construction, storage and transport are that much easier.

For the first time ever, E-flite have equipped the A-10 Thunderbolt II Twin 64mm EDF with Spektrum SAFE Select and AS3X technologies. The Spektrum DSMX receiver fitted in the A-10 Thunderbolt features the AS3X (Artificial Stabilization 3 aXis) system that nullifies the effects of turbulence and wind by working behind the scenes to provide increased precision and stability when your RC jet experiences non-optimal flying conditions.

SAFE Select is optional technology that gives the E-flite® A-10 Thunderbolt II Twin 64mm EDF an extra margin of safety by enabling features that will ensure your flight envelope is limited to keep you out of trouble until you are a better flyer or have familiarized yourself with the controls. No programming is required to engage SAFE Select as it is built into the receiver. You just need to follow the manual directions and change up the binding sequence to switch it on.