With the first full tube frame chassis in RC, the Axial Wraith is built for those willing to aggressively tackle rough ground and see if this RC crawlers durability can be compromised. By reducing the size of the lower rails and skid plates Axial have refined the 2.2 Wraith chassis design in order to give you, even more, ground clearance. Being able to slip through and over/past most obstacles through improved handling is the big advantage of the boatsides on the Wraith’s skidplate.

To allow for more aggressive climbing Axial moved the battery mounts to the front of the chassis in order to capitalise on better weight distribution. To achieve the scale realism of a full-size truck Axial shifted the servo from the top of the axle to the chassis. 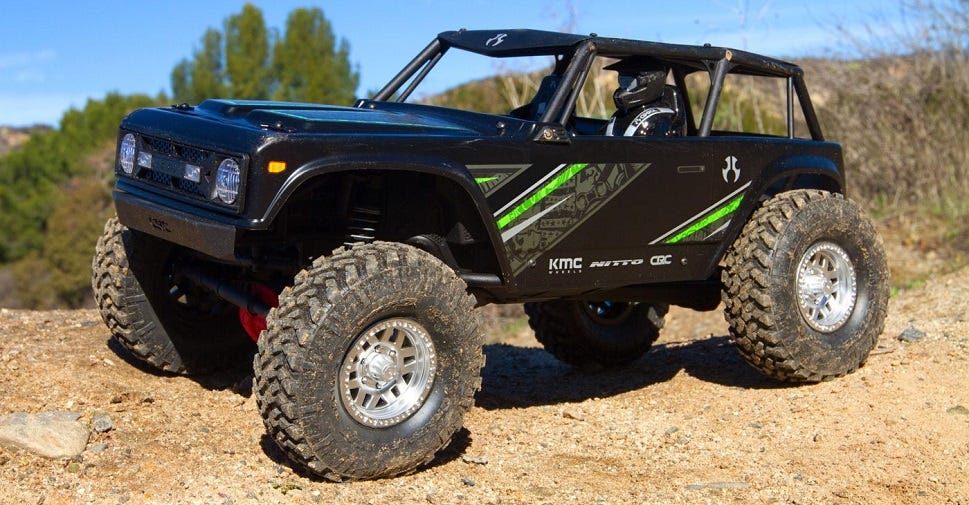 Using a brushed 540 turn motor the Wraith 1.9 has a powerful drive train to turn the front and rear, single piece, battle-tested AR44 axles. The ground clearance and driveshaft angles have been improved with the pinion gear being positioned 6mm above centre. The Wraith has been engineered for additional strength with improved gear surface contact, optimized gear ration to cut down on torque twist, sizeable flex-reducing load bearings, and, metal gear construction.

Modify your handling to suit conditions with tune dampening allowed by the adjustable oil-filled, coil over shocks. Keeping your Wraith gripped tightly to a number of different surfaces are the officially licensed Nitto Grappler tyres moulded from hard wearing S30 compound featuring a large block tread.

The attention paid to the scale detail on the Wraith 1.9 RC crawler is second to none. The polycarbonate body on the Wraith is packed with scale accurate features including the radiator, moulded plastic grill and two LED-equipped headlights large enough for night crawling. Under the bonnet, you’ll find tucked in front of the chassis battery mount, a replica V8 engine that serves as a tough outer layer for the Spektrum SRX200 receiver that serves to resist dust, debris and water.

Built for experienced drivers and novices alike, the Axial Wraith 1.9 RTR is a factory assembled RC crawling beast that requires a few additional extras to get you on the track – four AA’s for the 2.4GHz Spektrum transmitter, battery pack and an IC3 connector lead along with a battery charger.