Two-time King of Hammers rock racing champion and owner of Bomber Fabrication, Randy Slawson, teamed up Axial to create the original RR10 Bomber 4WD RTR. Using the dominant 1/10th scale Axial full tube chassis rig the RR10 Bomber 2.0 4WD Rock Racer signifies the evolution of this proven winner as it now comes with some serious upgrades. First is the new Spektrum DX3 transmitter that gives you outstanding interference resistance, range and response with its DSMR technology. The integrated thumb steering option on the handle of the DX3 allows for one-handed steering with precision and safety. You also get a Spektrum 3 channel SR315 receiver which, along with your DX3 radio, is Spektrum Smart technology compatible. Featuring a metal servo horn and metal gears the Spektrum 15kg S614 servo not only gives you reliable steering but is also waterproof enabling you to race rain, hail or shine.

The RR10 Bomber 2.0 4WD Rock Racer comes in two different livery choices - the Randy Slawson Bomber, and, the Savvy Off-Road Bomber livery. Fully licensed wheel and tyre options come with each livery to give them the performance looks of their full-scale counterparts. The Savvy Offroad Bomber features Falken Wildpeak M/T tyres and the Randy Slawson Bomber has BF Goodrich Baja T/S KR3 tyres. There are a host of realistic scale details that include moulded driver figure with three choices of black styrene helmets – motocross, motorsport and open skull-face.

Both versions of the RR10 Bomber 2.0 4WD Rock Racer feature the same high-performance components build around the scale tube chassis. The full bearing transmission features all-metal internal gears to help you take on the toughest rock racing you can find. The integrated motor mount gives you the option of endless gearing configuration while the single-speed factory gearbox has a high gear installed. In order to provide more holding power and precise tuning, the RR10 Bomber 2.0 4WD Rock Racer features a dual slipper that uses a pad on either side of the spur gear giving additional surface area. Strengthened 32-pitch gearing on the spur gear is ideal for situations requiring high torque and you have the option of putting in a two-speed transmission component (AXIC0999) that is sold separately. 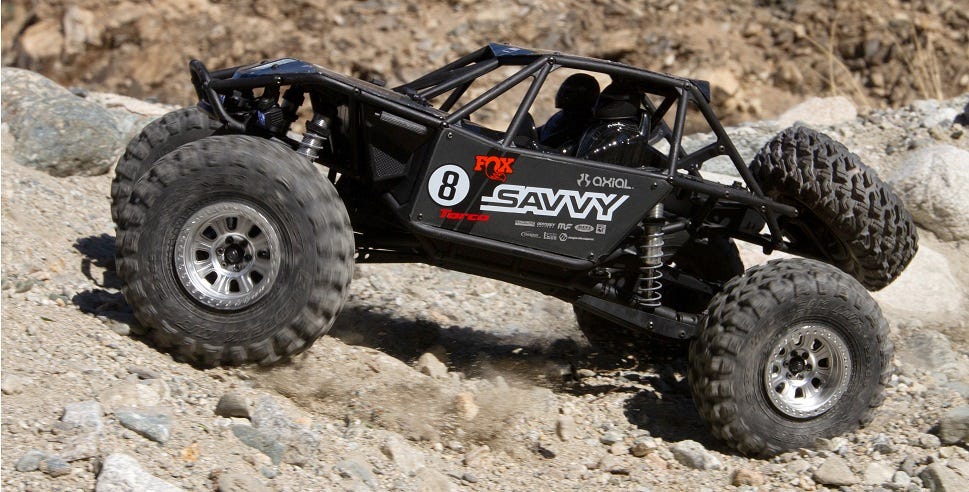 In order to ensure smooth performance through the range of travel on the RR10 Bomber 2.0 4WD Rock Racer aluminium King/Fox shocks have been included that feature precision machined pistons. Featuring clear coated, polished aluminium bodies these shocks are precision made and threaded for pre-load tuning ability and quick ride height adjustability. Mounted on the links rather than at the axle, the rear shocks allow for better high-speed handling and more suspension travel.

To ensure dependable traction on these RC Bombers they have 4WD locked differentials. Better driveshaft angle and increased ground clearance come from the offset pumpkin of the AR60 ACP-Axle. The removal of two body clips will get your easy access to the forward-mounted battery tray that can accommodate 2S or 3S LiPo batteries. Time to rock and race!